Against Which, Ross Gay 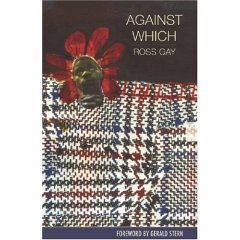 I have a significant bias for this poet and this poetry, and so, perhaps I'm an unreliable reader. If so, you can just ask someone who's read this book, or someone who's heard this poet, or someone who's read any of the poems herein what they think, and I would be very surprised if you received anything back but resounding praise (read astonishment) at the rich, tender strength of these poems. It's really as simple as that. Good poetry. If you're on the east coast, you can keep track of his reading schedule by going to the publisher's website, here. I'm including, in place of my own praise, some comments on the book from some other writers whose opinions you may trust.

“…What Ross Gay sees, what he sings about, is a crippled woman taking a walk in her wheel chair through the agency of the poet’s strong hands; or two brothers embracing in the death chamber, and the untranslatable song between them; or recovery from pain coalescing with the beginning of spring; or the glorious sexy vision of an ankle, or a midriff; or the blue whale’s deep sea love scream; or football season in late October. He also sings about the rage and violence inside and the urge to destroy; and the horror of Alzheimer’s; and murder; and cancer; and butchered animals and cannibalism; and lynching; and the bullet’s journey—almost, almost too neatly the reverse side of the coin, as if one could prove the other—or lived by the other—as if, in the dream of light, he cannot allow himself to forget the darkness, he is so given over to the honest and accurate rendering, or as if he allows himself a final affirmation so long as he admits, or incorporates, the negative...”-Gerald Stern

Whether he’s talking about the pain of slavery or a child being beaten up on a playground, Ross Gay’s Against Which suggests poetry as the way by which we might understand “birth’s phantom limb.” It makes me think of poetry in an entirely new way.-Toi Derricotte


What a hammer, what a velvet wrecking ball, what a rip tooth saw Against Which is! Ross Gay is a terrific poet of enormous energies and gifts whose poems both “terrify and comfort,” as Berryman put it. This is a book with which we must reckon: read it live.”-Thomas Lux

say birdsong
at death’s bed-
side plus honeybees
their hover and thirst say
thickets of clover
aquiver the gold
swell limning
morning clouds
the light behind it
say wet eye
sthe orb’s cock-eyed swirl
extubate
say the honey
between nape and scapula
a slow ride
between two points
the plush rug of ivy
swallowing this tree
pissing
in a wood say
the last rattle of the thorax
the peristaltic earth
say home say
posted by poet-scholar-professor-type at 6:52:00 PM